On our 2 week trip across Europe, Lithuania was our final stop. Before meeting Augustinas, I didn’t know anything about Lithuania and definitely couldn’t have pointed it out on a map. I had my first visit in March and the places we visited were interesting and made me feel so welcome. Plus – the food 😍 Super homely, comforting and filling. It probably helped that the majority of what we ate was cooked by his parents, who can make some seriously tasty stuff!

I loved my first trip there and I was so excited to see more of the country and try more of the food this time around. We stayed for part of the week in Vilnius, the capital, which is where Augustinas grew up, and the rest of the week we road tripped up to the Northern coast of the country. So this post is pretty much a mixture of traditional Lithuanian cuisine mixed in with the modern, stylish food scene of Vilnius.

On our road trip, we stopped at quite a few places up the country. If you were to drive straight up from the bottom to the top, it would only take 3ish hours, so we decided to spread it out and zigzag our way around some cool attractions! But we’ll leave that to another post.

In the UK, our diet is healthy and has a good balance of fruit, veg, protein, leafy greens etc. But on this trip, we full on carb-ed out. And we loved it! 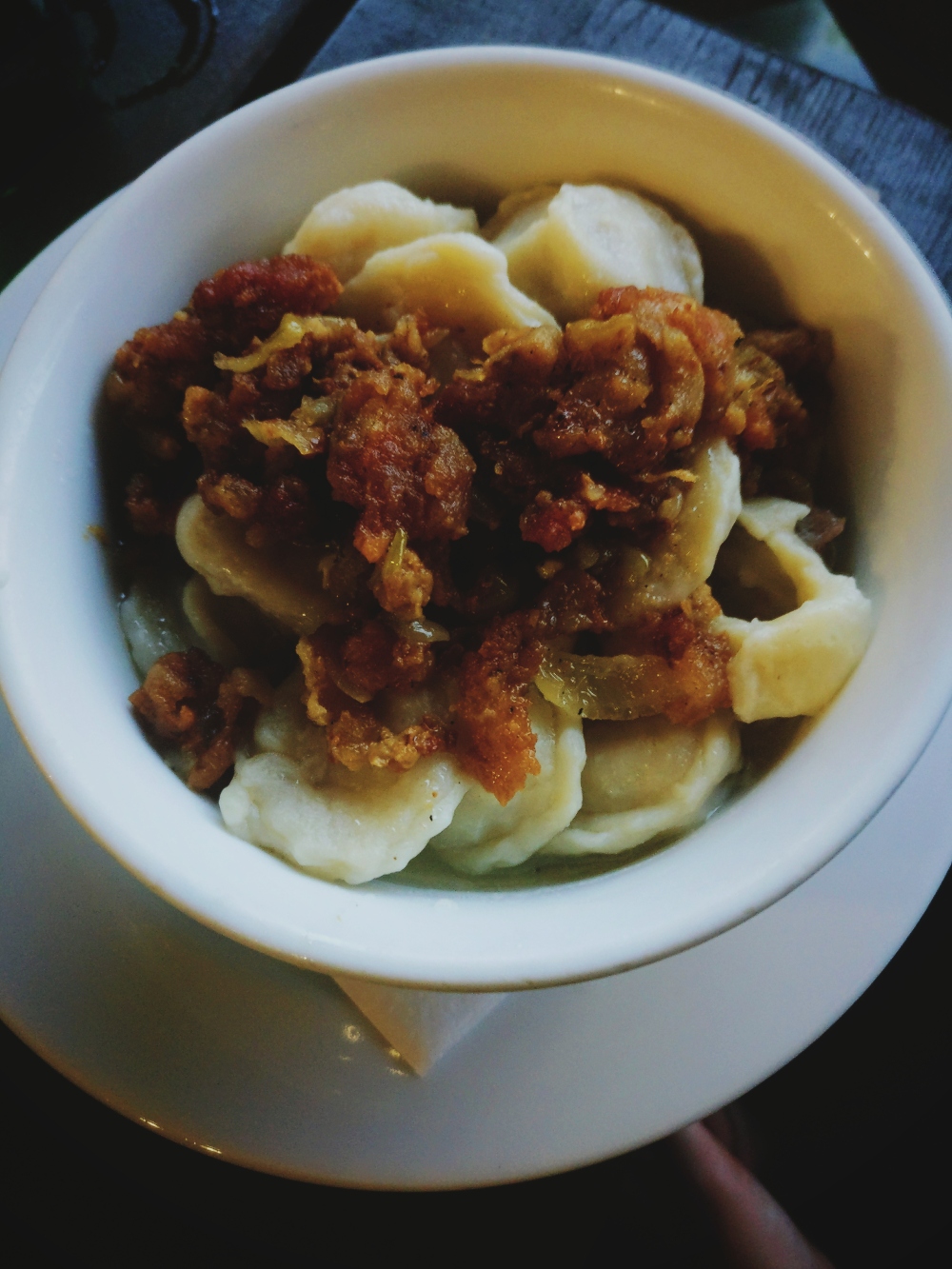 Let’s start with some traditional stuff. These are Koldūnai (pronounced kol-doo-nay), which are dumplings that are usually served with fried bacon bits and a thick creamy sauce, which is just so fattening but SO great. They are either filled with meat, cottage cheese or potato. His mum makes them better than this place did.

Another traditional dish, Cepelinai (pronounced zep-eh-lee-nay), is a potato based dumpling. This one (pictured above) is fried and cut in half, but they are usually Zeppelin shaped, large dumplings entirely encasing the meat. These are seriously heavy and I can only handle 2 at a time! You can have them boiled or fried, and the meat inside is usually chopped up and nicely seasoned. Again, serve with bacon bits and the heavy cream.

Both of those traditional dishes we had at his parents and out at restaurants, but home is best! If you’re planning a visit to Lithuania, you need to try them to get a real authentic taste of their cuisine.

But fear not healthy eating, carb-avoiding readers! Vilnius is packed full of cool, hipster and modern restaurants and cafes. Augustinas, Asta (his sister) and I had lunch at the sushi restaurant Rise, which is on Gedimino street in the city centre. This is meant to be one of the best places to get sushi in the city. 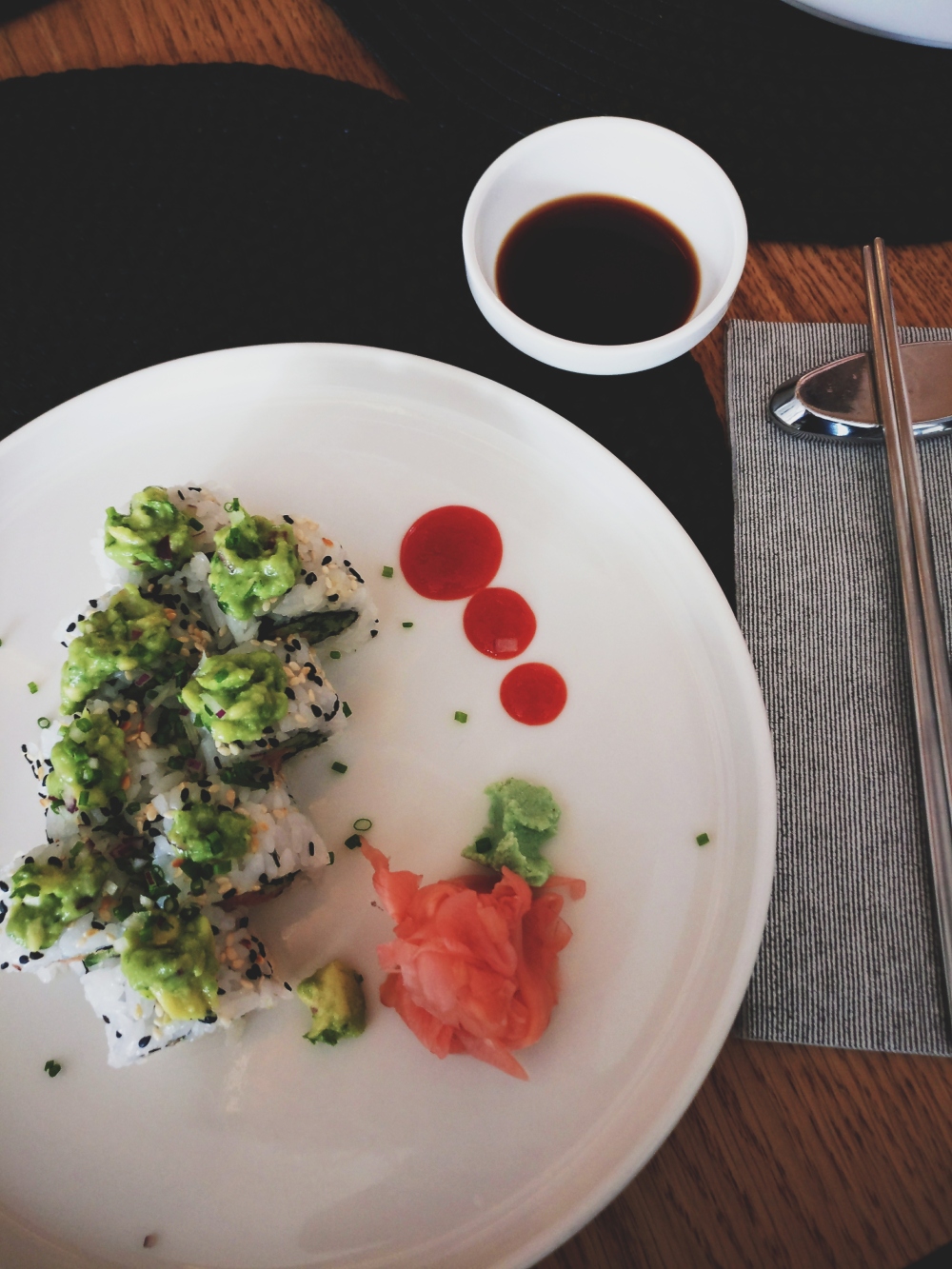 One evening we went to the opera at the Lithuanian National Opera and Ballet Theatre, and ate out afterwards. Super sophisticated, obviously! If you’re in Vilnius, try and see an opera or ballet, as the building is spectacular and you can get tickets for really reasonable prices.

We ate at Carré, which again is on Gedimino street. We shared lots of different plates, from mussels to liver pate, and olives to chicken wings 😋 all of it tasted fantastic and there was a great range to choose from, with larger main meals and sharing plates.

AND they have supersize cocktails. Think giant boozey slushie, in every flavour and alcohol combination! Though we wouldn’t recommend the Bloody Mary, that was pretty revolting 😂

Finally, I want to share with you a really special place we found in Palanga, which is on the North coast of Lithuania. We found this place called A-Petit as it had good ratings online, but when we walked in, the decor left us feeling not particularly passionate. It was a bit cafe-like, despite it being an evening restaurant. But ignore that, and focus on the food!

What we have here is Pink Soup! 💖 a traditional, cold Lithuanian soup from which our blog gets its name! Just look at the colour. You get a bowl of hot roast potatoes to eat it with, which is a really nice contrast against the cool, creamy soup.

At the back of the picture we have fried black bread with cheese sauce. Arguably one of my favourite foods in Lithuania and is, of course, probably one of the most fattening, garlic-y and cheesy! It’s usually served in bars as a snack to have with beer. Just a word of warning: you will wake up with VERY bad morning breath 🤢 but I think it’s worth it!
So there we are! Traditional dumplings, cold beetroot soup, fried black bread, sushi, cocktails and mussels. If you want to try lots of different foods that you may not have experienced before, whilst still having modern cuisine to hand, Vilnius is the place for you.

We’ll post about places to visit and things to do in Lithuania really soon, so keep an eye out!